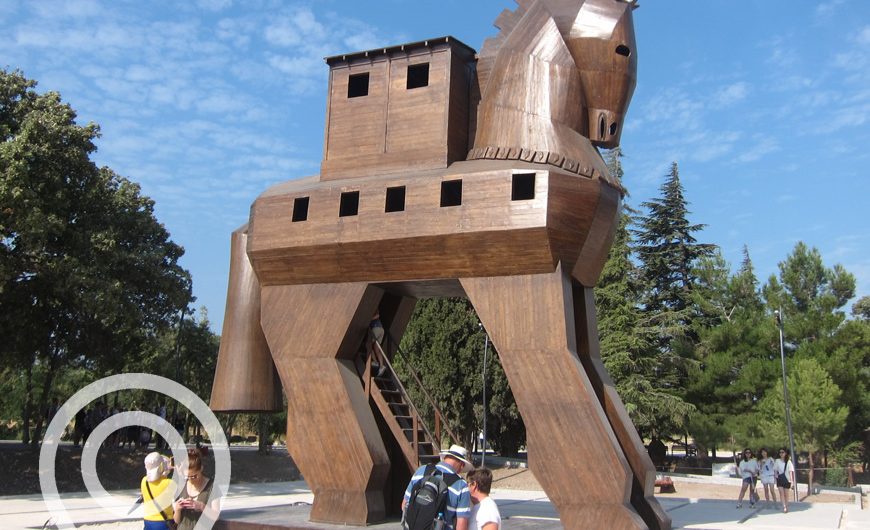 This is the reason you are here, so make sure you do it right and get a guide. While you can easily travel around the Gallipoli Peninsula and visit all the important sights, war cemeteries, and memorials yourself, to get a real feel for how the battles unfolded at Anzac Cove a century ago, a local guide adds all the necessary background. Most guided tours go for about four hours and every second is needed to really appreciate the remote beaches, the ridges, valleys, and trenches and tunnels hidden in the undulating wild scrub of the area where so many lost their lives. You can do a very long full-day tour from Istanbul or go to Canakkale and stay a night or two to enjoy the area.

While you are in Gallipoli, spend some time enjoying the seaside resort of Canakkale, where hourly ferries dart across the Dardenelles joining the European Gallipoli peninsula with the Turkish mainland in Asia Minor. A short half hour trip south from Canakkale are the remains of the city of Troy. The giant wooden horse from the Hollywood movie starring Brad Pitt and Eric Bana is on the promenade at Canakkale, while there’s another at the ruins themselves which are now starting to become a worthy tourist attraction. There is a lot more to Troy then the story from Homer’s Iliad and the trip is worth the effort.

Your likely arrival destination in Turkey, you need at least four full days to truly appreciate all that is on offer in this ancient city that straddles Europe and Asia. Once Byzantium, then Constantinople, the city has a history to rival Athens and Rome. The big sights include the Aya Sofya, once a Christian cathedral then a mosque and now a museum; the Blue Mosque younger by some 1000 years; Topkapi Palace; the Roman Hippodrome; and the Grand Bazaar and Spice Market. Across the Golden Horn over the famous Galata Bridge is Karakoy and the hip shopping strip of Istiklal Caddesi topped by Taksim Square. And there are regular cruises up the Bosphorus from the Sea of Marmara to the Black Sea, that showcase the great palaces and grand houses along the waterway.

The most famous tourist area of Istanbul, many who visit the city don’t leave its environs. Apart from the Aya Sofya, Blue Mosque, and Hippodrome, it is walking distance to the giant covered Grand Bazaar and equalling alluring Spice Market. The other major attractions in the area include the underground cistern, made famous in James Bond movies and Dan Brown novels, the massive Topkapi Palace where the Sultans ruled for 800 years, and the nearby Istanbul Archaeological museum which holds some of the region’s amazing hidden history. This is the area to stay while visiting Istanbul because so much is so close. There are dozens of small hotels, hostels and pensions but the place to stay if you can afford it is the Four Seasons, a transformed prison now the ultimate in luxury with commanding views of the historic sights and the Bosphorus.

One of Turkey’s must-see places, Ephesus drew the Apostle Paul in the years after the death of Christ and pilgrims are still heading there in droves. But now they come to see some of the best and biggest Roman ruins outside Italy. For fans of archaeology or “Raiders of the Lost Ark” it’s a fascinating look at how the Romans lived. Nearby are the remains of the Greek Temple of Artemis, one of the Seven Wonders of the Ancient World; and the supposed house where Christ’s mother Mary lived out her final days. There’s nowhere to stay in Ephesus itself but the beautiful beachside port of Kusadasi is a short drive away. Stay in a boutique hotel like the La Vista on the hills on the south side of town to get the best views of the harbour and islands including the Greek isle of Samos.

South of Kusadasi are the beach resort towns of Bodrum, Marmaris, Fethiye and Kas which have turquoise water and amazing western sunsets. Australia and New Zealand has some of the best beaches in the world but the village life and food at the Turkish beaches make them unique.

This central Turkish region features lunar-like landscape, ancient underground cities some 800m deep, towns carved into the sandstone mountains complete with churches and and painted walls, and giant volcanic rock shapes carved over centuries by the wind and rain. Urgup and Goreme are the starting points for the tours on foot, bicycle, horse or bus. Some of the valleys and ravines look a bit like the Grand Canyon in the US and are a hikers’ paradise. The other great way to see this area is by hot-air balloon. Weather conditions are conducive year round and while views of the landscape from on high are incredible, the experience of floating away as the sun rises is worth the cost alone.

It’s a sauna, body scrub and massage all in one. The men and women are separate and you can decide how many extras you want. Some of the baths are centuries old, especially in Istanbul, which adds to the experience, although the cost is usually lower in the regional areas. For about $A70 you can get the full service.

9. Turkish delight and baklava, with Turkish tea or coffee

Some of the cafes around Istanbul have been serving Turkish delight and baklava for hundreds of years. They go down a treat with sweet Turkish black tea served in small liqueur-style glasses. Turkish coffee is also served black and sweet in small cups. Both provide a great pick-me-up, with just one Turkish coffee enough for evened hardened caffeine addicts.

The quality and style vary from region to region but the kebab is a standard throughout Turkey. In Capadoccia they have a pottery kebab where the meat is cooked inside a pottery jar, a bit like a Moroccan tajine, but it’s cracked open at the table and poured on the plate. Pide or Turkish pizza is another staple. Fish is good in the coastal areas, especially the sea bream, and the Turks do a great line on eggplant or aubergine dishes as well as red and green peppers or capsicums. The locals wash it all down with Raki, an anise-flavoured alcoholic drink, but the local beers and wines may be more to Anzac tastes.